Click here to read about LHC’s approach to Covid 19 as we return to a safe system of agile working from all our studios.
Back to Latest News

We’re delighted to announce that our Director, Glayne Price, has earned a place in the finals of the European Women in Construction and Engineering Awards 2016, in the Best Woman Architectural Technologist category.

Architectural Technologist Glayne is one of an elite shortlist of women from across Europe who have reached the finals of the WICE Awards following a two-month judging process.

As a Company Director for LHC, based in LHC’s Exeter studio, Glayne has delivered a wide range of projects across the South West region and further afield including the award-winning Horizon development in Budleigh Salterton, the brand new £22m JCB Academy in Staffordshire from a Grade 2* listed building, and the multi-million pound regeneration scheme, Home@Heartlands, in Pool, Redruth.

Glayne is also a committee member of South West Women in Construction (SWWIC) and, until recently, Secretary of the Devon and Cornwall Branch of the Concrete Society.

Glayne was nominated by LHC Equity Directors John Baulch and Rob Bramhall with Nigel Blackman providing testimonial to Glayne’s ability in the category of Best Women Architectural Technologist.  Nigel, who retired from LHC in 2014, was Glayne’s mentor from the time she joined LHC at the age of 18.  Glayne explains: “Originally I had planned to follow my father into the Navy as a draughts person but the entry qualifications were out of my reach as I wasn’t a natural academic. It was thanks to my careers teacher who suggested a BTEC OND in Building Studies at Plymouth College of Further Education which was the gateway to me joining The Company of Designers in Plymouth as a Junior Graduate Technician. The Company of Designers later became LHC.”

In his submission to the judging panel, Nigel wrote:

“Glayne started her architectural career in 1990 as a trainee technician. She showed immense promise from the outset with a thirst for knowledge, a keenness to learn everything she could about construction and a willingness to assume responsibility for whatever task she tackled. Glayne was identified as one of our rising stars and in her early 30s she was promoted to an Associate, running her own team and forming part of the management team. She was made a Director of LHC some six years ago and is now responsible for managing the wellbeing, resource planning, workload and supervision of 50% of the architectural team in the Exeter office, as well as mentoring junior staff.”

“Having known Glayne for more than 25 years and enjoyed working alongside her for most of that time, I am delighted that she has been nominated for this award. Glayne’s loyalty to LHC is phenomenal and her recognition within the company, the region and the industry is testament to the role she plays and the skill and service she provides to her peers and her clients.”

Glayne is actively involved in encouraging more young people to choose a career in construction and engineering and has been involved in an Ambassador Programme specifically targeting 16-18 year olds run by South West Women in Construction. SWWIC, who also present their own Apprentice and Graduate Awards, is run by a dedicated committee with the support of CITB, and Devon and Plymouth Construction Training Groups who kindly agreed to help fund and deliver the follow up training. She says:

“We can’t just rely on schools to spot skills and guide young people into this exciting field of work. As an industry we need to help educate both pupils and parents about the wide variety of options available in construction and engineering.

“I always loved drawing so becoming an architectural technologist was a natural choice for me and I was encouraged all the way by my parents. There are so many fascinating jobs available from building design or interior design through to engineering for people who have strong skills in maths and sciences.”

Final interviews for the 2016 WICE Awards will take place on April 21st in London with winners being announced at a prestigious award ceremony in May.

To find out more about the European Women In Construction & Engineering Awards visit wiceawards.com/. 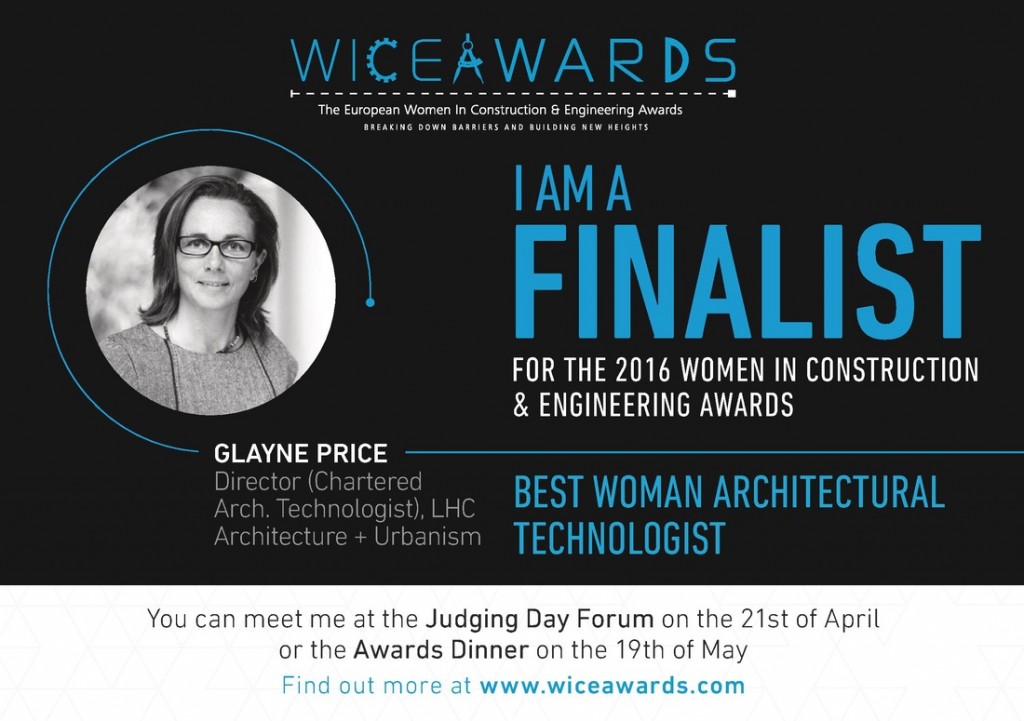